This project seeks to integrate social science and computer science tools to unlock new forms of data for social research. A group of collaborators at the University of Michigan and Georgetown University have been working together on a series of efforts related to analyses of social media, survey, and news content data to understand how we can best examine these forms of data and to answer key social questions. 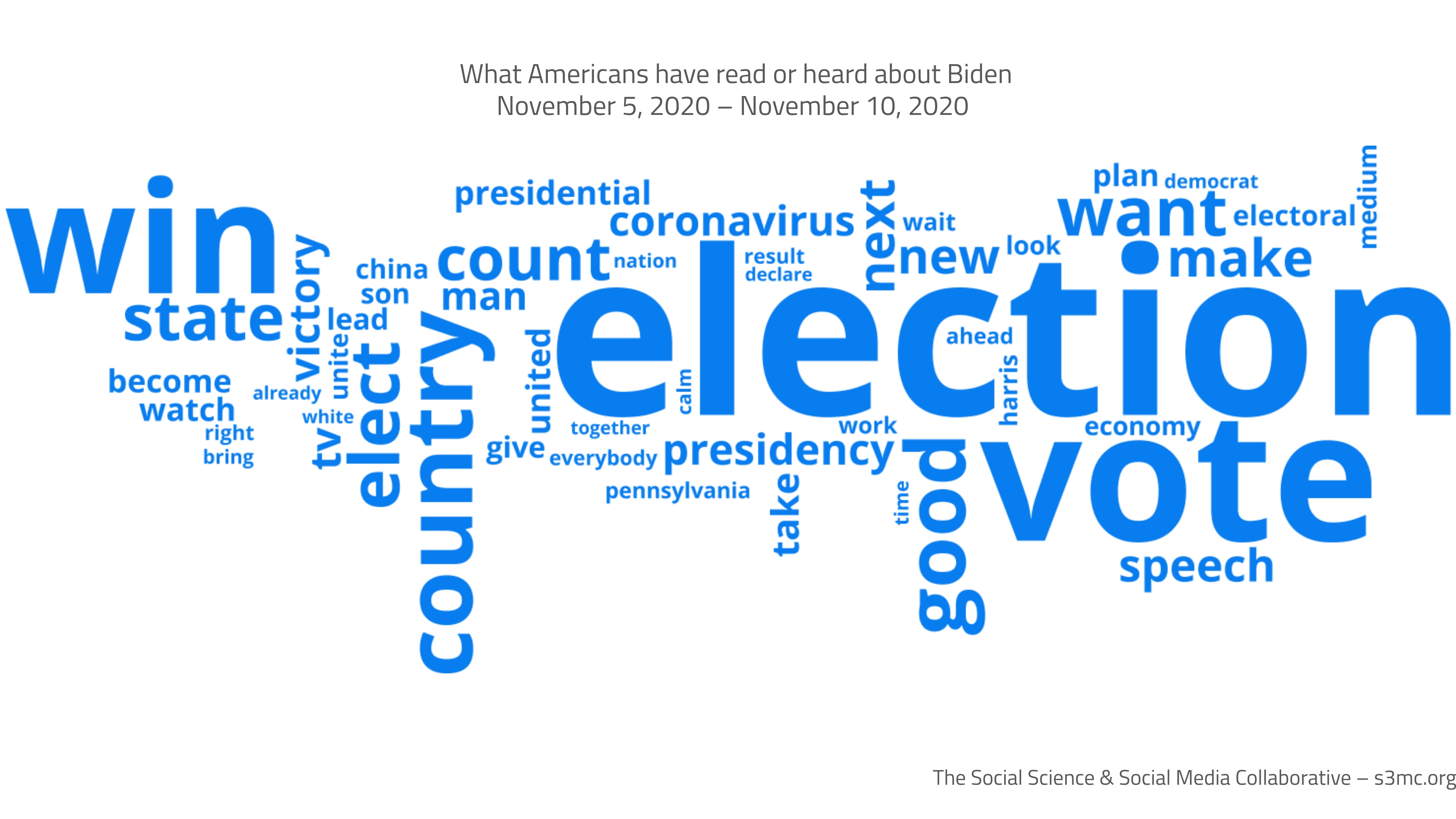 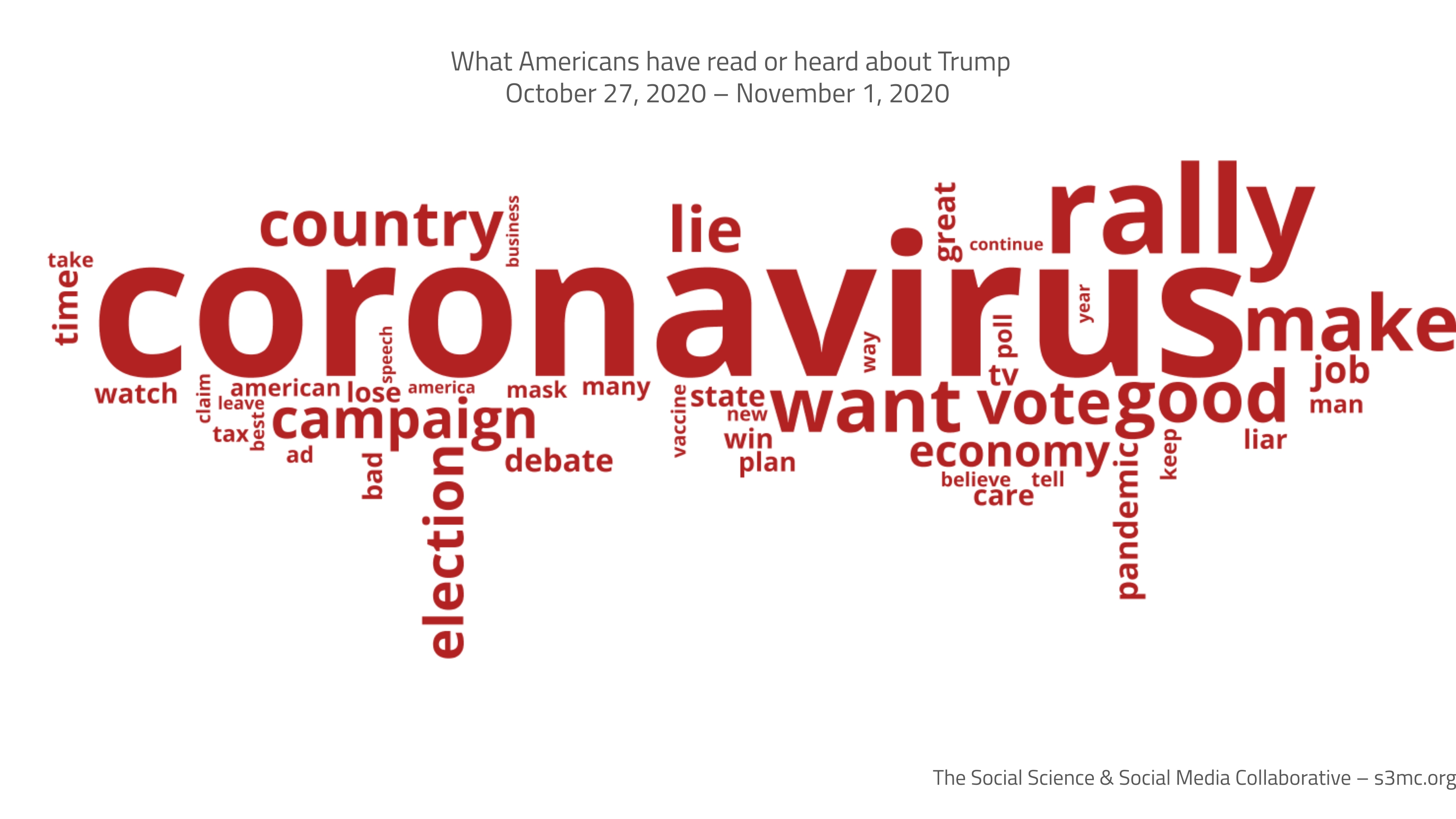 As the campaign closes, coronavirus remains the main event

Once again, Trump’s coronavirus diagnosis dominates news about the campaign

In this collaborative project with the Annenberg Public Policy Center, we are exploring how individuals make choices in U.S. Elections.

Assessing Polling Errors in the 2020 U.S.Presidential Election: An Examination of State-Level Panel Data

— In 2020, a series of state-level pre-election polls indicated that Joe Biden would handily beat Donald Trump across many of the states expected to be pivotal in the election. Instead, election margins in these states were far closer than anticipated, leading to widespread perceptions of a polling failure. This study leverages probability-based panel survey data from Michigan, Wisconsin, Pennsylvania, and Florida to test a series of hypotheses about the source of these apparent polling errors. Specifically, we test the possibilities that errors (1) were attributable to the difficulty of recruiting Trump supporters, (2) were associated with a differential tendency to participate in surveys among eventual Trump voters, (3) could be attributed to variations in the success of Republican and Democratic campaigns in their voter mobilization efforts, (4) were associated with inaccurate expectations about which Americans would vote in the election, and (5) could be attributed to so-called “shy trump” voters who were unwilling to express their preferences in the survey. To examine these possibilities, we compare respondents reported election behaviors with their pre-election preferences, third party records on whether or not they voted, the distribution of observed votes in their precincts, and their tendencies to respond to pre-election survey waves. Based on the distinctions we observe, we discuss the extent to which the errors observed were consistent across states as well as whether any weighting or imputation strategy could be expected to properly adjust for the biases observed.

Features of ballot design, such as the ordering of candidates’ names, the orientation of columns on the ballot, and other decisions made by election officials can make marginal changes to individual behavior in ways that can influence outcomes. This work explores these effects.

Another Reason Clinton Lost Michigan: Trump Was Listed First on the Ballot

Trump's margin of victory in Michigan in 2016 was so small that he probably wouldn't have won the state if he hadn't been listed first on the ballot. I discuss the effect in a recent Center for Political Studies Blog Post http://cpsblog.isr.umich.edu/?p=1792.

Prevalence and Moderators of the Candidate Name-Order Effect: Evidence from Statewide General Elections in California

The social sciences are experiencing a data revolution, where new forms of data are increasingly becoming available. Figuring out how to use these data to generate social understandings and how they should relate to more traditional forms of data collection is a critical challenge, and one that motivates this area of research.

How do people decide what candidates to support or

Set Up A Meeting