Assessing Polling Errors in the 2020 U.S.Presidential Election: An Examination of State-Level Panel Data 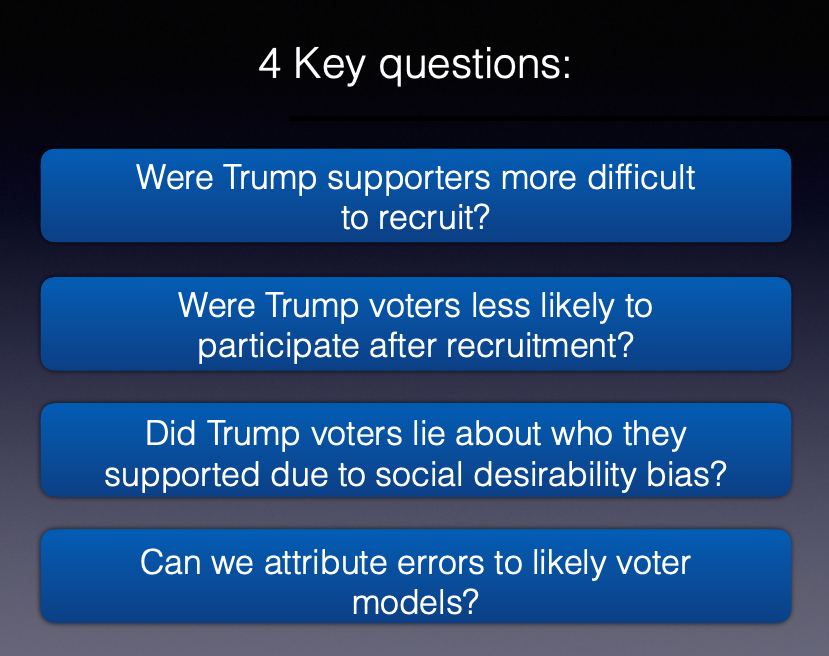 — In 2020, a series of state-level pre-election polls indicated that Joe Biden would handily beat Donald Trump across many of the states expected to be pivotal in the election. Instead, election margins in these states were far closer than anticipated, leading to widespread perceptions of a polling failure. This study leverages probability-based panel survey data from Michigan, Wisconsin, Pennsylvania, and Florida to test a series of hypotheses about the source of these apparent polling errors. Specifically, we test the possibilities that errors (1) were attributable to the difficulty of recruiting Trump supporters, (2) were associated with a differential tendency to participate in surveys among eventual Trump voters, (3) could be attributed to variations in the success of Republican and Democratic campaigns in their voter mobilization efforts, (4) were associated with inaccurate expectations about which Americans would vote in the election, and (5) could be attributed to so-called “shy trump” voters who were unwilling to express their preferences in the survey. To examine these possibilities, we compare respondents reported election behaviors with their pre-election preferences, third party records on whether or not they voted, the distribution of observed votes in their precincts, and their tendencies to respond to pre-election survey waves. Based on the distinctions we observe, we discuss the extent to which the errors observed were consistent across states as well as whether any weighting or imputation strategy could be expected to properly adjust for the biases observed.

Set Up A Meeting